I've been inspired by some of the blogs doing articles on breathing - something we all take for granted. As an amateur classical singer I should know a thing or two about breathing but I can still be guilty of not breathing deeply enough.

http://www.youtube.com/watch?v=sqxbZq7d86Q
Posted by Fiona at 03:40 No comments:

My letter for this week's PBJ is B for Bread or Bara in Wales. I'm also sticking with my Imbolc theme as we're nearly there and bread, in my house, is always part of my Imbolc celebrations. My mum was Irish and I always remember the gorgeous Soda Bread she used to make - mine never quite works out the same but here's her recipe if you'd like to have a go. This is a plain white Soda Bread but you can add fruit to it for a special occasion. We would eat this with a coddle - an Irish stew made with sausages, bacon and onions. 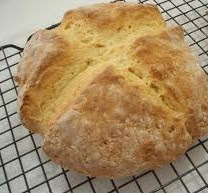 DOROTHY'S SODA BREAD
1LB soda bread flour or plain flour if you can get soda bread flour
1 teaspoon salt
1 teaspoon bicarbonate of soda
1-2 oz of caster sugar
14-16 fl oz of buttermilk
Oven temp - 200C/ 400F gas mark 6 for 30 minutes then 150C300F gas mark 2
Sieve the flour salt and bicarbonate into a large mixing bowl and add sugar. Make a well in the centre and pour in nearly all of the buttermilk, stirring until it become a sponge like dough.
Shape by hand into a circle and mark on top into quarters but don't go right through the dough. Sprinkle with flour place on baking sheet and bake in preheated oven for 30 minutes. After this time, reduce temperature and cook for a further 30 mins until well risen and a light brown in colour. Allow to cool for a few minutes and then wrap in a cloth and leave to cool completely.
As well as Soda Bread I also like to give a nod to my Welsh roots and make Bara Brith - which literally means speckled bread - a firm favourite in our house and very easy to make.

12 oz of mixed dried fruit
3/4 pint cold tea for soaking
1lb self raising flour
1/4 teaspoon mixed spice - more if you like it spicey up to 1 teaspoon
8 0z soft dark brown sugar
1 small egg - beaten
a 2-3lb loaf tin
Heat oven to 170 C
Put tea and fruit in a bowl and either soak overnight or microwave on medium for about 10 minutes until the fruit has plumped up. Allow to cool. Mix flour with sugar and spice and add to the fruit and tea - add beaten egg. Mix well and spoon into tin. Bake for about 1 1/4 hours. Allow to cool then cut thinly and spread with butter if liked!
Posted by Fiona at 08:11 3 comments:

This is my first entry for the Pagan Blog Project as I've only just joined.
As I will be focusing on Imbolc on my blog for the next few weeks, my choice for the letter B is Brigid.
Brigid's day is 1 February and of course is celebrated in the Pagan Wheel of the Year as Imbolc. In early Ireland her festival was indeed known as Imbolc - there are many permutations of the origins of the name, but the most common is that it refers to the first milk of the year as ewes birthed their lambs, heralding the rebirth and return of new life. Some
say its literal translation is "in the belly" which can also mean the belly of the earth thereby including seeds and stirrings in the ground of the first roots after the long winter. In later centuries, as the Christian calendar took hold, it was replaced by Candlemas Day on February 2 and dedicated to the Virgin Mary.
Who was Brigid? Her origins are lost and it is hard to tell the Celtic Goddess apart from the Christian saint. She is the Goddess of poetry, healing, and smithcraft and also of the early Celtic crafts of dyeing, weaving and she was a guardian of farm animals, especially cows. She is deeply associated with the country of Ireland and the Goddess became transmuted into one of Ireland's much loved saints, second only to St Patrick.
The name “Britain” is a derivation of Brigit’s name. Britain was named for the ancient Celtic tribe, the Brigantes, who worshipped Brigit and were the largest Celtic tribe to occupy the British Isles in pre-Roman times. The tribe originally came from the area that is now Bregenz in Austria near Lake Constance. The word “brigand” comes from this tribe of fierce warriors.

Her worship probably spread from the Continent, and there are many place names remaining, such as Brittany in France, Brechin in Scotland, rivers in England Wales and Ireland are also named after her. Brittania, the symbol of Britain, is Brigid in her aspect of Goddess of Sovereignty or Guardian of the land. 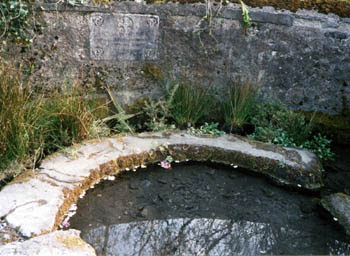 This is an image of Brigid's Well in Kildare, Ireland.

One thing I love about blogging is how one thing leads to another - a friend of mine was doing some research for me with regards to self-publishing and she sent me a link which in turn led me to the Pagan Blog Project - a brain child of Rowan Pendragon from onewitchesway.com. She has had a great idea of blogging A-Z for the whole years - 1 letter every two weeks and already very talented and knowledgeable people have signed up. I'm really looking forward to learning so much from everyone.
If you fancy joining in you'll find it here .....www.paganblogproject.com
Magickdiva
Posted by Fiona at 03:21 1 comment:

WELCOME TO FESTIVALS AND FEASTS

Welcome to my new blog for 2012. It is my aim this year to write my own cookery book based on the Pagan year. I want to celebrate the 8 Pagan Festivals with ideas for scrumptious recipes using seasonal foods. Together with ideas for spells, altar decoration ideas, herbs, oils - lots of goodies.
To compliment the book I thought I would also try and duplicate my ideas via the blog - it would also be lovely to hear some of your rituals, recipe ideas and how you like to celebrate the Pagan year.
Even if you are not a Pagan I'm hoping the book will still interest you as it will contain some lovely seasonal recipes. Sorry, you won't find Strawberries in December, or Sprouts in June. Isn't it the fact that we only get certain foods at certain times of the year which keeps them special? There's nothing like looking forward to asparagus season, berry season, spring greens to keep the palate interested.
As well as the book - I am also developing my own pagan soaps. These can be purchased from Etsy or myself direct - and I'll be including them on the blog every now and then.
I hope you will join with me on this journey - I will be starting with the next upcoming festival which is Imbolc.
Blessed Be
Magickdiva
Posted by Fiona at 01:54 No comments: 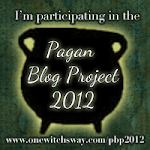 Create a MySpace Playlist at MixPod.com

Thank you to all my lovely followers: